Popular
Sonya Blaze: How She Got Her First $10,000...
Investment Property for Dummies
How Mental Health Is Important for Happiness
Best Blogging Gadgets for the Self-Hosted Blogger
How to Find a Good Mobile Home
Finance Services for Small Businesses – What Is...
What Are the Best Schools for Secondary Education?
How to Test Internet Speed on Different Devices
University of Madras Distance Education (UMDE) Reviews
Rare Beauty Blush Swatch – Which Ones Do...
Home — Finance CFMEU protest over construction vaccine mandate a sign of things to come in war with Victorian Government
— Finance 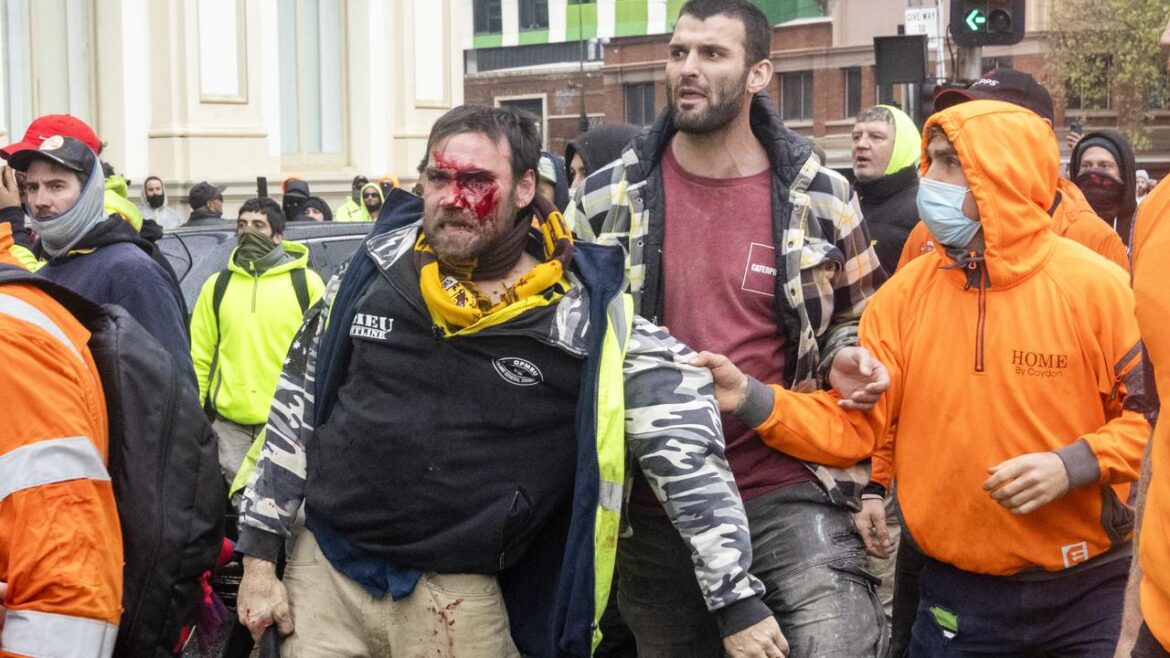 An ugly war between the construction sector and the Victorian Government is unlikely to ease, with one big sticking point ensuring chaos. Violent scenes in Melbourne of construction workers protesting outside the industry’s union headquarters for a second consecutive day shouldn’t come as a surprise to the authorities in Victoria.

For some time, the government has known that a critical measure in its road map to reopen the state and begin living with Covid-19 is a significant sticking point for workers in several sectors. Now, a tense new battle is brewing with the $22 billion construction industry shut down for two weeks – and an even more extended closure being discussed.

Neither side is likely to back down easily, with a workforce known for its at-times militant industrial action declaring war on Daniel Andrews and his government.

And it’s a brawl that could drag in other industries and their powerful trade union bodies right around Australia.

Hundreds of tradies walked off the job in Melbourne on Monday and descended on the Elizabeth Street office of the Construction, Forestry, Maritime, Mining and Energy Union (CFMEU).

Violence and chaos soon erupted, with bottles and other projectiles thrown, and even a dog allegedly kicked, with police responding by firing rubber bullets into the crowd.

In response, the government has shut down the construction industry for two weeks in Melbourne, Geelong, Ballarat, Mitchell Shire, and the Surf Coast, effective midnight on Monday.

“We have seen widespread non-compliance across the industry, and that‘s why we’re taking necessary steps to protect every single Victorian.”

Many protesters gathered again in the CBD on Tuesday, met by an enormous police force, including riot and tactical response officers.

Anger has been brewing for some time over Covid-19 safety measures imposed on the sector, which is already subject to a 25 percent cap on its workforce, but the straw that broke the camel’s back was an abruptly announced vaccine mandate.

To work on-site, all tradies in Victoria must have received at least their first jab by September 23, the state’s Covid reopening road map declared.

But the mandate was an “unrealistic and blunt approach” that undermines the vaccine rollout, given at concise notice, and which did little else but inflame tensions, the Victorian Building Industry Group of Unions (BIGU) said in a statement.

“The (BIGU) maintains the view that the construction industry would have voluntarily reached high levels of vaccination without a heavy-handed approach,” the statement read.

“This heavy-handed mandate by the chief health officer, which was implemented with no notice, has only served to drive many people towards the (anti-vaxxer) movement.”

The union’s Victorian state secretary John Setka said there had been little consultation with the government over Covid measures affecting the industry.