Popular
Sonya Blaze: How She Got Her First $10,000...
Investment Property for Dummies
How Mental Health Is Important for Happiness
Best Blogging Gadgets for the Self-Hosted Blogger
How to Find a Good Mobile Home
Finance Services for Small Businesses – What Is...
What Are the Best Schools for Secondary Education?
How to Test Internet Speed on Different Devices
University of Madras Distance Education (UMDE) Reviews
Rare Beauty Blush Swatch – Which Ones Do...
Home — Sports Emma Raducanu Defeats Leylah Fernandez for the U.S. Open Title
— Sports 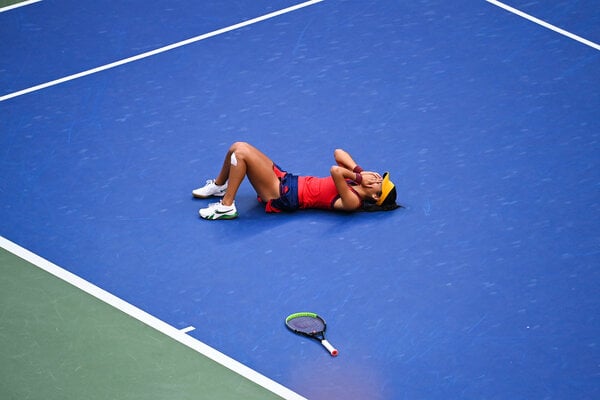 On Saturday, Emma Raducanu, the 18-year-old British phenom, completed a shocking run through the U.S. Open with a straight-set victory over Leylah Fernandez of Canada for a title that will surely go down as one of the great underdog journeys in the history of sports.

And she did it the way she had handled every other match she played in New York, where she did not lose a set in 10 games, a remarkable 20-set streak, and another feat that is unlikely to be repeated anytime soon. Saturday’s scoreline was a clean 6-4, 6-3. “An absolute dream,” Raducanu called it.

Raducanu’s game, a rare mix of power and precision, proved too much for Fernandez, a quick and fearless counterpuncher who possesses deceptive power as well. On Saturday afternoon, though, in front of a packed Arthur Ashe Stadium where the crowd blanketed both players with love, Fernandez simply ran out of points and punches, as Raducanu’s laserlike shots to the deepest parts of the court kept landing just beyond the Canadian teenager’s reach.

After a tight first set, during which both players had chances to grab the early lead, Raducanu surged toward the finish line in the sixth game of the second set, breaking Fernandez’s serve by blocking what looked like a sure putaway with a screeching forehand down the line.

Ever the fighter, Fernandez saved two match points as she served at 2-5 to keep the match going. In the next game, she sent Raducanu sprawling to the ground and chased Fernandez’s shot deep to the corner. But Raducanu settled herself during a medical timeout to get a cut on her leg bandaged, and five points later finished off the match with an ace. She collapsed on the court as the stadium exploded.

“I was just praying not for a double-fault,” Raducanu would say of the finish, just before she became the unlikeliest lifter of a Grand Slam trophy that tennis has ever seen.

Queen Elizabeth even chimed in, sending out a statement from Balmoral Castle praising Raducanu for “a remarkable achievement at such a young age.”

This was the rarest of finals, a contest between two players known only to the most faithful of tennis fans two weeks ago.

They had played once before, in the Wimbledon junior tournament in 2018. Raducanu won that match in straight sets as well. But two years ago, Raducanu was pretty sure her path would lead to college and a career in finance. She took her entrance exams earlier this year, around the time she played in the lower tier tournaments that earned her a wild-card entry into Wimbledon, where she made her Grand Slam debut.

This was her first summer of top-level competition. Fernandez, who turned 19 this week and is ranked 73rd, was known as little more than a scrappy, undersized battler until a few days ago. Few had predicted greatness for her. A teacher told her to give up the game some years back because she would never amount to anything.