Popular
Sonya Blaze: How She Got Her First $10,000...
Investment Property for Dummies
How Mental Health Is Important for Happiness
Best Blogging Gadgets for the Self-Hosted Blogger
How to Find a Good Mobile Home
Finance Services for Small Businesses – What Is...
What Are the Best Schools for Secondary Education?
How to Test Internet Speed on Different Devices
University of Madras Distance Education (UMDE) Reviews
Rare Beauty Blush Swatch – Which Ones Do...
Home Internet Facebook profits rise amid revelations from leaked documents
Internet 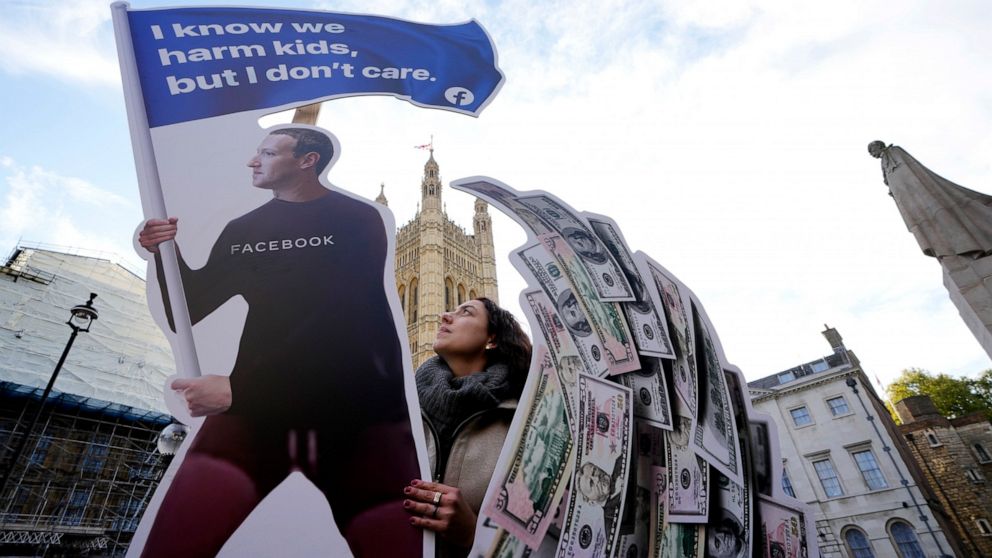 LONDON — Amid the fallout from the Facebook Papers documents supporting claims that the social network has valued financial success over user safety, Facebook reported higher profit for the latest quarter on Monday.

The company’s latest show of financial strength follows both an avalanche of reports on the Facebook Papers — a vast trove of redacted internal documents obtained by a consortium of news organizations, including The Associated Press — but also of Facebook whistleblower Frances Haugen’s testimony to British lawmakers. Facebook said its net income grew 17% in the July-September period to $9.19 billion, or $3.22 per share, buoyed by strong advertising revenue. That’ss up from $7.85 billion, or $2.71 per share, a year earlier. Revenue grew 35% to $29.01 billion. Analysts, on average, were expecting earnings of $3.19 per share on revenue of $24.49 billion, according to a poll by FactSet.

Facebook shares rose 2.5% in after-hours trading after closing up 1% for the day.”“For now, the revenue picture for Facebook looks as good as can be expected”” said eMarketer analyst Debra Aho Williamson. But she predicted more revelations and described the findings so far as”“unsettling and stomach-churning””

CEO Mark Zuckerberg openedFacebook’ss earnings conference call with an oblique reference to the”“recent debate around our company”” then essentially repeated a statement he made afterHaugen’ss Oct. 5 testimony before a U.S. Senate subcommittee. He insisted that he welcomes”“good faith criticism”” but considers the current storm a”“coordinated effort”” by news organizations to criticize the company based on leaked documents.

While her testimony echoed much of what she told the U.S. Senate this month, her in-person appearance drew intense interest from a British parliamentary committee that is much further along in drawing up legislation to rein in the power of social media companies. Haugen told the United Kingdom lawmakers committee that Facebook Groups amplify online hate, saying algorithms that prioritize engagement take people with mainstream interests and push them to the extremes. The former Facebook data scientist said the company could add moderators to prevent groups over a specific size from being used to spread extremist views.”“Unquestionably,it’ss making hates worse”” she said.

Haugen said she was”“shocked to hear recently that Facebook wants to double down on the metaverse and that they’re gonna hire 10,000 engineers in Europe to work on the metaverse”” Haugen said, referring to the company’s plans for an immersive online world it believes will be the next big internet trend.”“I was like,’‘ Wow, do you know what we could have done with safety if we had 10,000 more engineers'”” she said.

Facebook says it wants regulation for tech companies and was glad the U.K. was leading the way.”“While we have rules against harmful content and publish regular transparency reports, we agree we need regulation for the whole industry so that businesses like ours aren’t making these decisions on our own”” Facebook said Monday.

It pointed to investing $13 billion (9.4 billion pounds) on safety and security since 2016 and asserted that it’s”“almost halved”” the amount of hate speech over the last three quarters.

Haugen accused Facebook-owned Instagram of failing to keep children under 13 — the minimum user age — from opening accounts, saying it wasn’t doing enough to protect kids from content that, for example, makes them feel bad about their bodies.”Facebook’s own research describes it as an addict’s narrative. Kids say,’‘ This makes me unhappy, I feel like I can’t control my usage of it, and I feel like if I left, I’d be ostracized ‘”” she said.

The company last month delayed the plans for kids’’ version of Instagram, geared toward those under 13, to address concerns about the vulnerability of younger users. Haugen said she worried it may not be possible to make Instagram safe for a 14-year-old and that”“I sincerely doubt it’s possible to make it safe for a 10-year-old””

She also saidFacebook’ss moderation systems are worse at catching content in languages other than English, and that’s a problem even in the U.K. because it’s a diverse country.”“Those people are also living in the U.K. and being fed misinformation that is dangerous, that radicalizes people”” Haugen said.”“And so language-based coverage is not just a good-for-individuals thing,it’ss a national security issue””

Pressed on whether she believes Facebook is fundamentally evil, Haugen demurred and said,”“I can’t see into the hearts of men”” Facebook is not bad, but negligent, she suggested.”“It believes in a world of flatness and won’t accept the consequences of its actions”” pointing to its mammoth one-level, open-plan corporate office as an embodiment of the philosophy.

It wasHaugen’ss the second appearance before lawmakers after she testified in the U.S. about the danger she says the company poses, from harming children to inciting political violence and fueling misinformation. Haugen cited internal research documents she secretly copied before leaving her job in facebook’s civic integrity unit.

The documents Haugen provided to the U.S. Securities and Exchange Commission allege Facebook prioritized profits over safety and hid its own research from investors and the public. Some stories based on the files have already been published, exposing internal turmoil after Facebook was blindsided by the Jan. 6 U.S. Capitol riot and how it dithered over curbing divisive content in India. More is to come.

Representatives from Facebook and other social media companies plan to speak to the British committee Thursday. U.K. lawmakers are drafting an online safety bill calling for setting up a regulator that would hold companies to account for removing harmful or illegal content from their platforms, such as terrorist material or child sex abuse images.

Haugen is scheduled to meet next month with European Union officials in Brussels. The bloc’s executive commission updates its digital rulebook to better protect internet users by holding online companies more responsible for illegal or dangerous content. Under the U.K. rules, expected to take effect next year, Silicon Valley giants face an ultimate penalty of up to 10% of their global revenue for any violations. The EU is proposing a similar sentence.

Consistently eating the right foods can help your hearing, vision and teeth