Highlights From the Men’s and Women’s N.C.A.A. Tournaments on Sunday 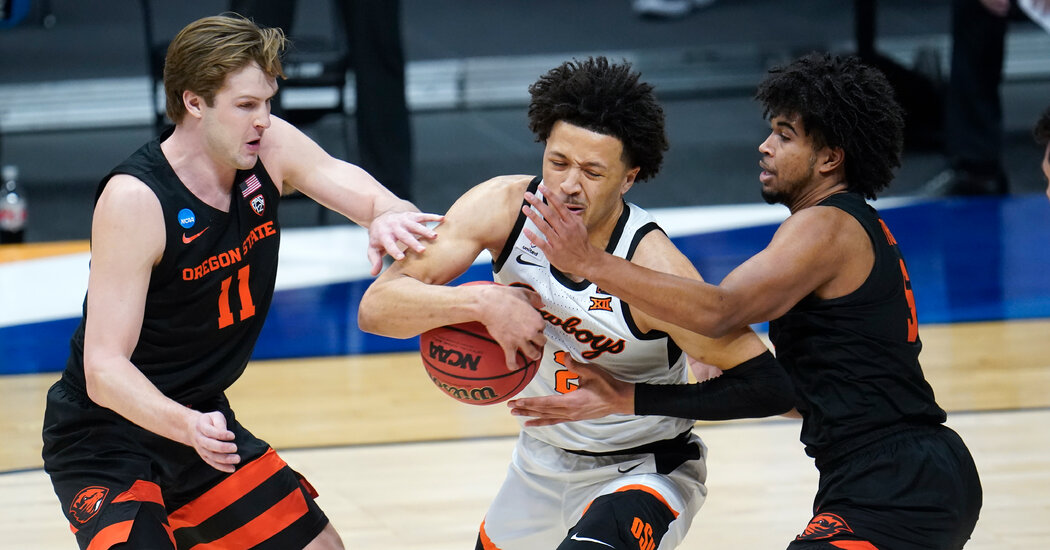 Cade Cunningham had dreams of a Carmelo Anthony-type run to an N.C.A.A. title in his one-and-done year at Oklahoma State. “I’m excited,” Cunningham, the 6-foot-8 freshman point guard, said before the N.C.A.A. tournament began. “Melo’s big shoes to fill, but I’m up for the challenge for sure.” As it turned out, Cunningham couldn’t lead the No. 4-seeded Cowboys past the second round against No. 12-seeded Oregon State. The Beavers, the Pac-12 tournament champions, knocked off the Cowboys, 80-70, to seemingly end Cunningham’s college career. Cunningham, a Texas native who has a 2-year-old daughter named Riley, is widely expected to be the No. 1 pick in this year’s N.B.A. draft.

In the last 10 years, only two No. 1 picks had even reached the Final Four, with Kentucky’s Anthony Davis in 2012 being the only one to win an N.C.A.A. title. “Cade expects to be the No. 1 pick,” Cowboys coach Mike Boynton said before the tournament. “He’s not going to talk about it, but he believes he’s the best guy.”

The No. 1 and 4 seeds in the Midwest Region have been eliminated after No. 1 Illinois was upset earlier by No. 8 Loyola Chicago, 71-58, with Sister Jean Dolores Schmidt cheering on the Ramblers in the arena. The Beavers will face the Ramblers in the round of 16. The Pac-12’s five teams still haven’t lost a game in the tournament.

Cunningham became just the third player to be named the Big 12’s year and freshman of the year but was uneven in Indianapolis. He shot 6 of 20 for 24 points with four rebounds and three assists against Oregon State after going 3 of 14 for 15 points in a win over No. 13-seeded Liberty.

Oregon State used a 36-13 first-half run to seize a 44-30 halftime lead. Cunningham’s 3-pointer cut the Cowboys’ deficit to 70-67 with less than minutes remaining, but they never got closer. Ethan Thompson led the Beavers with 26 points, and Jarod Lucas and Maurice Calloo, who transferred from Oklahoma State, scored 15 apiece.