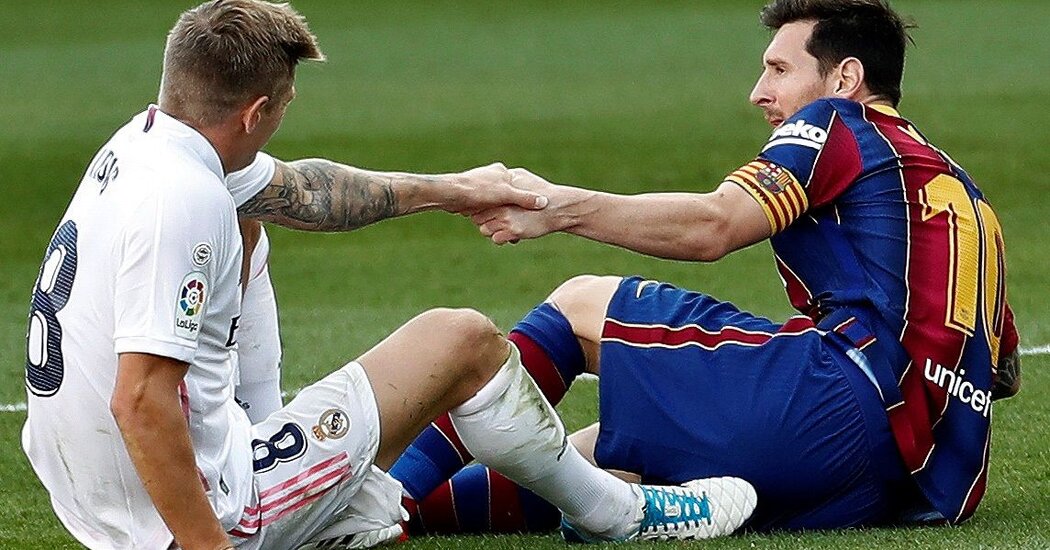 It does not require a great leap of the imagination to envision the final few weeks of the season playing out like this:

Atlético Madrid, shredded by nerves and running on fumes, surrenders its place at the summit of La Liga. Barcelona, restored and unbeaten since the turn of the year, supplants Diego Simeone’s team, reclaiming its crown.

At the same time, Real Madrid, the familiar scent of European glory in its nostrils, breezes past Liverpool and edges Chelsea to win a place in the Champions League final. Real Madrid would, by most measures, be the underdog in Istanbul. Manchester City and Bayern Munich, indeed, are more coherent, more complete teams. Even Paris St.-Germain, its mission for revenge fueled by the brilliance of Kylian Mbappé, has more star power, more forward momentum, as it proved so thrillingly on Wednesday night in Munich.

But it is Real Madrid, the Champions League, and these things do not necessarily conform to logic. It and Barcelona, the twin, repelling poles of the Clásico, each may be no more than seven weeks from glory. Both have spent much of this campaign in what looked like free fall. It is hardly inconceivable that, in a few weeks, they will have come to rest, still at the pinnacle.

That does not mean that the perception was an illusion. Barcelona’s financial strife is alarmingly real, even after the election of a new president. Its salary commitments are still more significant than those of any other team. Its squad is still aging. It has still frittered away hundreds of millions of dollars in the transfer market. It has still squandered its legacy, still alienated the most outstanding star in its history, still lost sight of itself.

Real Madrid’s situation is not quite as perilous, but here, too, are the telltale signs of institutional complacency and endemic drift. Its team is starting to creak with age. Its policy of paying premium fees for prodigious young talents — often with only a smattering of senior games under their belts — has not yet yielded the fruit the club imagined. Its payroll, too, is littered with unwanted high-earners; Real Madrid’s finances have been stretched by the revamp of the Santiago Bernabéu that has forced it to play home games at its training facility for a year; its belief that it can sign both Erling Haaland and Mbappé over the next two summers seems fanciful at best and faintly hubristic at worst. Lulled by glamour and success, Real Madrid has allowed itself to be transformed into the personal fief of its president, Florentino Pérez.