Popular
Sonya Blaze: How She Got Her First $10,000...
Investment Property for Dummies
How Mental Health Is Important for Happiness
Best Blogging Gadgets for the Self-Hosted Blogger
How to Find a Good Mobile Home
Finance Services for Small Businesses – What Is...
What Are the Best Schools for Secondary Education?
How to Test Internet Speed on Different Devices
University of Madras Distance Education (UMDE) Reviews
Rare Beauty Blush Swatch – Which Ones Do...
Home — Travel n Tour SpaceX’s Inspiration4 Civilian Crew Completes 3-Day Mission
— Travel n Tour 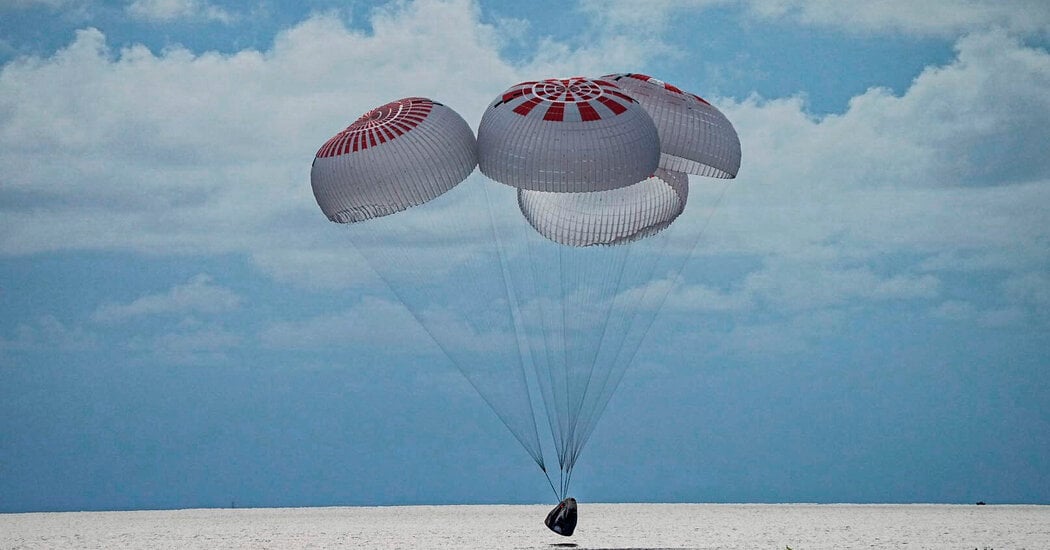 After three days in orbit, a physician assistant, a community college professor, a data engineer, and the billionaire who financed their trip arrived back on Earth, heralding a new era of space travel with a dramatic and successful Saturday evening landing in the Atlantic Ocean. The mission, known as Inspiration4, splashed down off the Florida coast at 7:06 p.m. on Saturday. Each step of the return unfolded on schedule, without problems. Welcome home to planet Earth,

Kris Young, space operations director at SpaceX, said to the crew as the capsule bobbed in the water. SpaceX, the rocket company started by Elon Musk, built the Falcon 9 rocket that launched the Inspiration4 mission and the Crew Dragon capsule, where the astronauts spent the past three days. Your mission has shown the world that space is for all of us and that everyday people can make extraordinary impacts in the world around them,” Mr. Young said. It was a heck of a ride for us,” Jared Isaacman, the 38-year-old billionaire who spearheaded Inspiration4, replied. “We’re just getting started.

The capsule, named Resilience, fired its thrusters for 15 minutes to drop out of orbit about an hour earlier. The parachutes deployed, slowing Resilience to about 15 miles per hour as it hit the water. Within an hour, all four crew members walked out of the spacecraft, one at a time, each beaming with excitement as recovery crews assisted them.

It was the latest achievement in a year of spaceflight milestones.

A couple of months ago, two celebrity billionaires — Jeff Bezos, founder of Amazon, and Richard Branson, leader of the empire of Virgin companies — went to the edge of space in vehicles built and operated by companies they had started, perhaps the beginning of a wave of wealthy space tourists making brief up-and-down jaunts off the planet. Mr. Isaacman, who is not nearly as well known as Mr. Bezos and Mr. Branson, has now gone much farther — to an altitude of 366 miles, higher than the International Space Station and the Hubble Space Telescope, an orbital speed of more than 17,000 miles per hour.