Popular
Sonya Blaze: How She Got Her First $10,000...
Investment Property for Dummies
How Mental Health Is Important for Happiness
Best Blogging Gadgets for the Self-Hosted Blogger
How to Find a Good Mobile Home
Finance Services for Small Businesses – What Is...
What Are the Best Schools for Secondary Education?
How to Test Internet Speed on Different Devices
University of Madras Distance Education (UMDE) Reviews
Rare Beauty Blush Swatch – Which Ones Do...
Home — Travel n Tour The Eternal Charm of Nathan’s Famous Hot-Dog Stand
— Travel n Tour 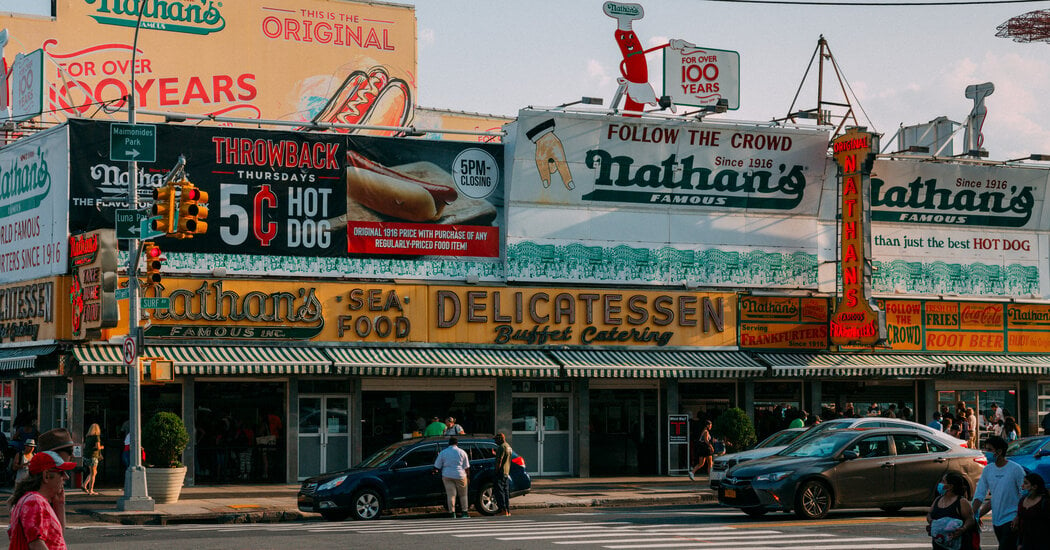 In this series for T, the author Reggie Nadelson revisits New York institutions that have defined cool for decades, from time-honored restaurants to unsung dives.

It’s a bright July morning when I arrive in Coney Island, and I feel the same excitement I did when I was 9 and, on warm summer Sundays, my father and I would leave our apartment in Manhattan and drive to this southernmost coast of Brooklyn. The Atlantic Ocean looks precisely as it used to — a deep cerulean blue — and the first little girl I see has pink cotton candy stuck in her hair. Already I can smell the ineluctable scent of Nathan’s Famous hot dog.

For me, the magic of that old Brooklyn was Passover dinner at my Aunt Lil’s in Flatbush, my father’s brothers kvetching about the departure of the Brooklyn Dodgers from Ebbets Field in 1957 — they would be mad about it for decades — and those trips to Coney Island in the late 1950s, when it was a child’s dreamscape of rides and food, of beach and boardwalk, and we would return home sunburned, stuffed with banana frozen custard and drowsy from the day’s delights.

A few minutes walk south from the Coney Island subway stop, Nathan’s Famous remains at the corner of Stillwell and Surf Avenues, where it’s been since it opened in 1916 and sold dogs for a nickel each. The building is a lot bigger now — it takes up nearly a whole city block — but its shed-like structure is still topped by a sign with the original, iconic green logo. Above that towers a metal cutout of a sausage sporting a chef’s hat, and across the facade, green and pink-orange neon letters spell out: NATHAN’S, SEAFOOD, DELICATESSEN. On the east side is a billboard displaying stats from the Nathan’s Famous Hot Dog Eating Contest, which has taken place here each July 4 since the ’70s; this year, the reigning champ, Joey Chestnut, shoved 76 sausages and buns down his gullet in 10 minutes. Thousands watched on TV. For me, though, the experience of eating Nathan’s dog is something to be savored — it’s about nostalgia.

The film producer Jonathan Sanger, an old friend who grew up in Brooklyn in the 1950s, has similarly vivid memories of the place. “When we were old enough to be good bike riders, my friends and I would ride all the way from Beverly Road to Surf Avenue, right into the heart of Coney Island. And there the whole experience unfolded, starting at Nathan’s, which was always our first stop,” he recalls. His older sister, Stephany, remembers how “there would be stacks of people seven deep waiting for their hot dogs.”

I buy a frank from the long counter that wraps around the building and anoints it traditionally — with mustard, ketchup, and a load of sauerkraut — then settle in at one of the picnic tables outside, surrounded by families and kids. Nathan’s dogs have a sheepskin casing that makes a noise that sounds like summer: snap when you bite into it. The taste is beefy, a little spicy, with the toasty crunch of the bun for contrast.

Fashion Bombshell of the Day: Takkunda from London