Popular
Sonya Blaze: How She Got Her First $10,000...
Investment Property for Dummies
How Mental Health Is Important for Happiness
Best Blogging Gadgets for the Self-Hosted Blogger
How to Find a Good Mobile Home
Finance Services for Small Businesses – What Is...
What Are the Best Schools for Secondary Education?
How to Test Internet Speed on Different Devices
University of Madras Distance Education (UMDE) Reviews
Rare Beauty Blush Swatch – Which Ones Do...
Home Internet The Latest: UK sets net-zero plan for its financial sector
Internet

The Latest: UK sets net-zero plan for its financial sector 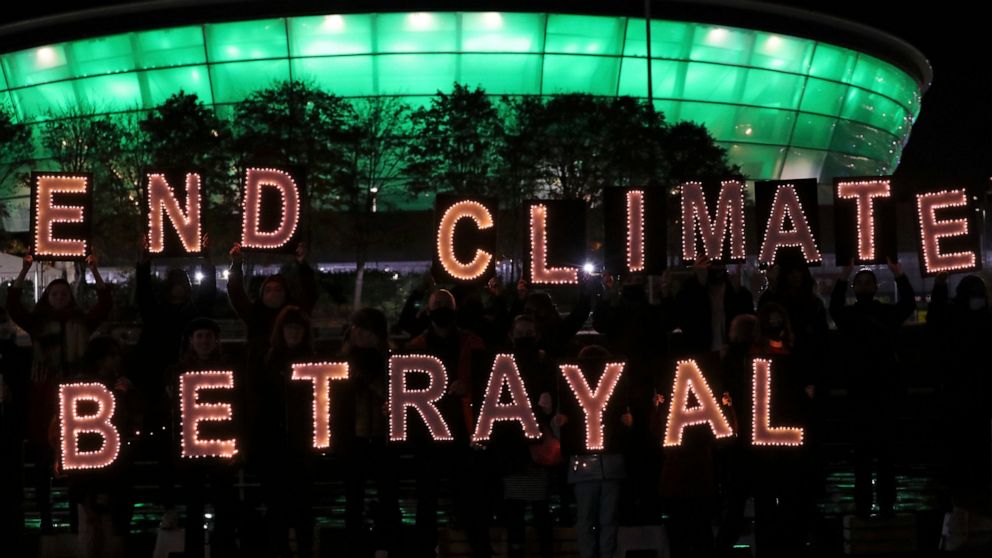 The latest on U.N. climate summit COP26 in Glasgow:

GLASGOW, Scotland — The British government plans to make the U.K. “the world’s first net-zero aligned financial center” as companies and investors seek to profit from the drive to build a low-carbon economy.

U.K. Treasury chief Rishi Sunak will lay out the government’s plans during a speech Wednesday as top financial officials from around the world meet at the U.N. climate conference in Glasgow, Scotland.

As part of the initiative, U.K. financial institutions and publicly traded companies will be required to publish plans detailing how they will reduce their contribution to global warming as Britain seeks to cut net carbon emissions to zero by 2050. A panel composed of industry and academic leaders, regulators, and community organizations will develop plans to ensure companies progress toward meaningful goals.

According to a statement, Sunak will say the U.K. is home to one of the world’s leading financial centers and “has a responsibility to lead the way” in financing efforts to fight global warming.

The comments come after Britain and other wealthy countries failed to meet their commitment to providing $100 billion a year to finance climate-related projects in the developing world by 2020.

Sunak will urge wealthy nations to boost their support for climate projects in the developing world, saying that the $100 billion targets will be met by 2020, according to the advance statement.

GLASGOW, Scotland — President Joe Biden praised fellow global leaders for their work at the U.N. climate summit, saying that they demonstrated a “great example of the kind of ambition you need” to confront the scourge of global warming.

“I can’t think of any two days where more has been accomplished on climate than these two days,” Biden said at the start of his summit-ending news conference.

Biden on Tuesday announced that the U.S. was launching a plan to reduce methane emissions, a potent greenhouse gas that contributes significantly to global warming. The announcement was part of a broader effort with the European Union and other nations to reduce overall methane emissions worldwide by 30% by 2030.

The president added that China, the world’s biggest greenhouse emitter, made a big mistake with Chinese President Xi Jinping not attending in person. He said the Chinese “lost the ability to influence people worldwide, and all the people here at COP” with its absence at the summit.

GLASGOW, Scotland — The United Nations apologized Tuesday for leaving participants at this year’s global climate conference struggling to enter the venue — or log onto virtual meetings.

The U.N. climate office that’s in charge of organizing much of the meeting in Glasgow, Scotland, said the event was taking place “under exceptional and unprecedented logistical circumstances.” This included pandemic restrictions for the more than 30,000 people registered for the Oct. 31-Nov. 12 conference, resulting in limitations on the number of people allowed into rooms.

Civil society groups have accused the U.N. of failing to be inclusive on an issue of great importance to communities worldwide.

The U.N. said the opening days had been “a learning process.”

“We are doing our utmost to continuously learn and adapt,” it said, but urged participants to prepare for endless queues and “in the case of inclement weather, please come prepared with appropriate gear.”

But Johnson said Tuesday that he wants the giant country to do more to slash carbon emissions. He said China had sent a “very high level” delegation to the U.N. climate conference talks in Glasgow even though Xi stayed home, citing the coronavirus pandemic.

“The question is, how much before? That’s what we’re discussing with China,” Johnson said.

The prime minister, whose country is hosting the conference in Scotland, said China had already made a “substantial” commitment. He praised Beijing’s decision to end financing for coal plants overseas, though not yet at home.

The United States and the United Arab Emirates led the effort, announced at the U.N. climate summit in Glasgow, Scotland. Thirty-one nations and other non-government organizations have joined the initiative. The initiative is called Agriculture Innovation Mission for Climate. The U.S. Agriculture Department said in a statement the program had already drawn $4 billion for investment in climate-friendly improvements in food systems and agriculture over the next five years.